James E. Robinson, the 2018 Dr. Scott Stewart Founder’s Award honoree, has given almost 30 years of service to Methodist Hospital and the South Philadelphia community. This award is bestowed by the Methodist Hospital Foundation and was first awarded in 1992.

Jim pioneered the Fashion Fundraiser ten years ago and has been the official MC at every event, championing the good works of the Foundation to all.

He began his decades-long service to Methodist and its mission in 1989. In his current positions as Chief Administrative Officer of Jefferson’s Methodist Division and Senior Vice President from Jefferson University Hospitals, Jim’s focus, drive and forward thinking have culminated in him being honored with the 2018 Dr. Scott Stewart Founder’s Award. Jim finds it humbling to be the first administrator to win this award.

“I might be the one recognized, but this is a recognition of the work our teams have been doing over decades. It’s the entire hospital and its staff working over years to keep us viable and successful,” Jim says. “Being at Methodist, I like the feeling you get, that sense of the importance a hospital is making and can make on the community. I like seeing health care in action — seeing it today, tomorrow and the next day.”

In addition to his work with the hospital and the Foundation in serving the health care needs of the South Philadelphia community, Jim dedicates his time to other causes. These include the Police Athletic League, the Methodist Home for Children, the Children’s Scholarship Fund Philadelphia and St. Thomas Aquinas School. The common thread of each of these organizations is providing opportunities that enable people, especially children, to reach for a better life.

“It’s giving a child the tools to succeed — whether its through health care or education,” he says. “I am a parent. I am a product of the foster care system. This unique experience gives me the chance to illustrate to children that no matter what happens early in life, that if you work hard and focus on education, health and lifestyle, good things will happen.”

Working in health care has been important for Jim. The health of the individual is critical to community success. He understands the big picture, but believes health care’s impact plays out on a local level. The Methodist Hospital Foundation can help fill gaps for the community.

“The Foundation is a tremendous asset with a simple mission to improve the health of South Philadelphia’s community, ” Jim says. “We are not just in the community, but part of the community.” 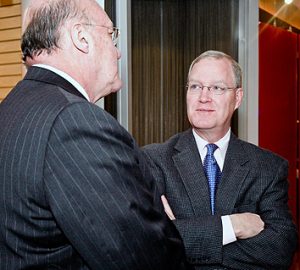 Richard W. Hevner, past Foundation Board Chairman with Jim

Richard W. Hevner, past Foundation Board Chairman and the 2002 Founder’s Award recipient, sees Jim as the perfect honoree, one whose goals mesh well with Methodist’s founder and award namesake, Dr. Scott Stewart.

“Jim always seems to have his hand on the pulse of everything happening at Methodist,” he says. “He knows the people at Methodist and the patients in the community, as well as how to work with larger organizations like Jefferson Health. He has helped keep the Foundation in an important place for projects needed in the hospital as well as grants to community groups. For all of this, he has been selected for the Dr. Scott Stewart Founder’s Award.”

Foundation Board Chairman J. Jeffrey Grant has known and worked alongside Jim for more than a quarter century.

“I have seen extraordinary examples of Jim’s caring attitude with the patients, staff and community,” he says. “His steady leadership is truly a tribute to Dr. Stewart’s legacy.