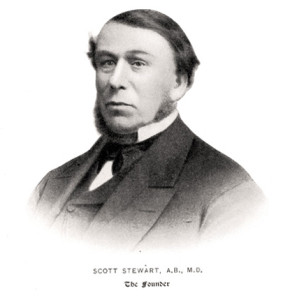 When Dr. Scott Stewart, a physician who practiced medicine his whole life in South Philadelphia, first planned the idea of Methodist Hospital back in 1877, he bequeathed $250,000 in his will to create the facility. Although seemingly a large sum of money in those days, it was still not enough to establish such a grand venture. Many people doubted his plan, but he included in his will the suggestion of establishing a board of trustees who could raise the necessary funds to see his dream come true. This hard working group did just that and helped create the outstanding medical facility we all know today.

Fittingly, still today, the Dr. Scott Stewart Founder’s Award is given by the Foundation Board to honor valuable members of the Methodist family. These worthy recipients have demonstrated their commitment to the community—following in the footsteps of our founder.  They put the needs of our patients and neighbors first.  They give of their time, talent and energy to ensure that the next generation of South Philadelphians have access to the best medical care and health information available to all. 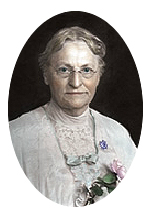 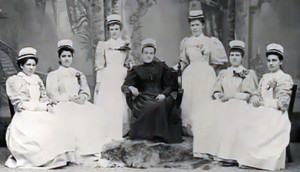 Four years after Dr. Stewart’s death, in 1881, the Hospital was incorporated and the Methodist Episcopal Church appointed a Board of Trustees.

Ground was broken in 1888, and in 1892, the Methodist Episcopal Hospital (M.E.H.) began its legacy of service to the community. A graduate of Dublin University, Dr. Stewart also stipulated that a training school for nurses be set up to make certain that the Hospital would always have an exemplary nursing staff. In 1892, Linda Richards, America’s first trained nurse, establishes the nursing school. The first class of trained nurses graduates in 1894. Today, Jefferson College of Nursing, continues that storied nursing tradition. Our programs merged in 2006. 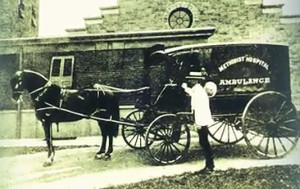 The Hospital Receiving Ward opens in 1899, and emergency patients arrive by horse-drawn ambulances. 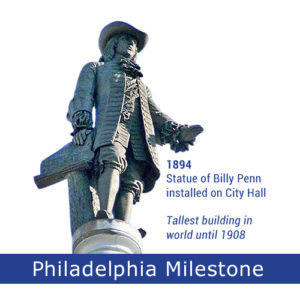 Board President, Thomas Bradley donates money to expand the Hospital from 100 to 150 beds with the opening of Bradley Hall in 1911.

Philadelphia too was experiencing an exciting time of pioneering firsts, with electric trolley service starting in 1892, the Reading Terminal grand rail station opening along with the Market in 1893 and the Broad Street subway begins operation in 1907. 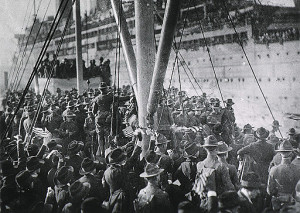 In 1917, the staff of Navy Base Hospital #5, headed by Directress of Nurses Alice Garrett, and comprised largely of M.E.H. doctors and nurses, set sail on the S.S. St. Louis bound for Brest, France.

Even before the U.S. entered the War, three Hospital trained nurses boarded the Red Cross “Mercy Ship” in 1914 to care for wounded soldiers in France and Russia, among them was Faye Fulton.  Nurse Fulton returned to establish the Hospital’s Anesthesia Department. She would become only the second woman nurse anesthetist in the US at that time.  Her career spanned more than 70 years at Methodist. 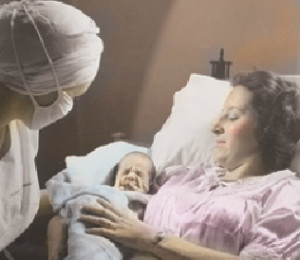 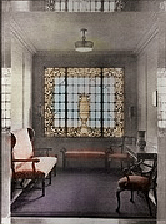 After the War, the Hospital was undergoing tremendous growth to keep up with the community’s needs.

To be born properly in Philadelphia, you had to be born at M.E.H.  Richard Norris, M.D., leading obstetrician in Philadelphia, brought most of his wealthy and socially prominent patients to the Hospital including the DuPonts from Wilmington, DE. 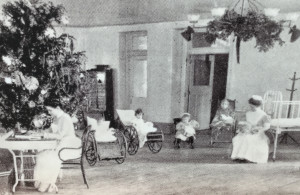 The 20-bed maternity ward was in constant use and by 1923 the Hospital had built a new Pavillion at the corner of Broad and Ritner Streets. The Philadelphia Evening Bulletin ran a story on the extensive new patient ward and expanded children’s ward with a page of photos showcasing the new facilities. This expanded children’s ward to 45 beds and added more private and semi-private rooms.  The Hospital grew to 350 beds. 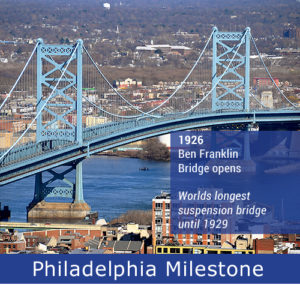 South Philadelphia was flooded with tourists from around the world as the Sesqui-Centennial International Exposition opens in 1926. This world’s fair celebrated the 150th anniversary of the signing of the US Declaration of Independence. More than 10 million people attended the festival grounds bounded by 10th Street, Packer Avenue, 23rd Street, and the US Navy Yard.  Today these grounds are occupied by FDR Park, Marconi Plaza, Packer Park Residential Neighborhood and the South Philadelphia Sports complex (Wells Fargo Center, Lincoln Financial Field, and Citizens Bank Park). 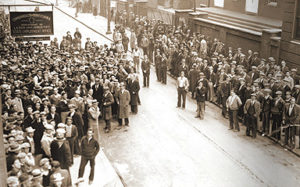 Unemployed men line up outside the State Department of Labor & Industry, Philadelphia

The hospital was hit hard by the great depression.  With one out of three South Philadelphians out of work, it was going to be a long decade for the hospital and its community. When the Stock Market collapsed on October 29, 1929 the country was in a tailspin. 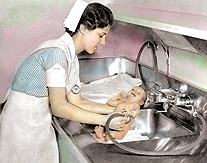 1940, 11 days was the average stay for babies in the nursery

More than 10,000 nurses lost their jobs. Despite desperate economic conditions, the Nursing School grew and expanded its curriculum. Like the country itself, Methodist was pulled out of the Great Depression by World War II, but at a price that found the hospital short on staff, supplies and services. 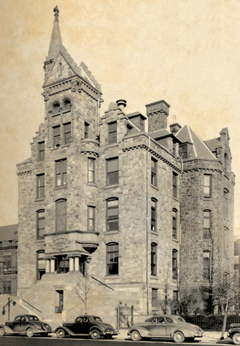 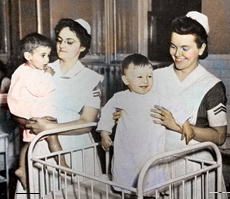 The Hospital witnessed an increased number of admissions from the Philadelphia Navy Base, further straining the Hospital’s ability to meet the demand for health services.

The wartime nursing shortage was compounded by expanded employment for women in industry.  The federally sponsored Cadet Nurse Corps was used to entice women to go into nursing.  The Corps promised fully paid tuition, room and board, a monthly allowance and uniforms. In 1944, M.E.H. signed onto the Cadet program. 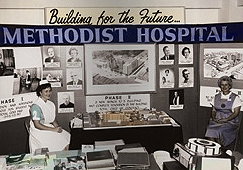 Methodist Episcopal Hospital launched a $1 million building fund campaign. A new library and lounge was opened for use by interns and resident physicians.

In 1950, M.E.H. began its affiliation with Jefferson Medical College and agreed to make its ward facilities and staff available for clinical teaching; Jefferson provided additional house staff for M.E.H. Earlene Richardson broke the racial barriers as the first African-American nurse to graduate from the School of Nursing in 1953. Planning began in 1959 for a decadelong major building modernization for the Hospital.

In the city of Philadelphia, construction of the Schuylkill Expressway began, the Walt Whitman Bridge opened, the “Whiz Kids” Phillies won their second National League pennant, and the world’s first computer is unveiled at the University of Pennsylvania. 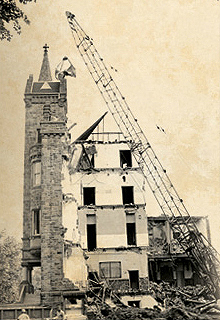 Demolition of the 135-foot Hospital tower on Broad Street

It was an era like no other. The country began the 1960s by electing John F. Kennedy the nation’s first Catholic president. His 1,000-day presidency ended with an assassin’s bullet, setting in motion events that would reverberate for the next decade. The U.S. involvement in Vietnam was a morass of loss with no end in sight, and the Watergate break-in and cover-up would eventually lead to the resignation of President Richard Nixon. 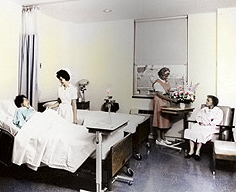 Methodist Episcopal Hospital officially changed its name to Methodist Hospital in 1961. With turmoil all around, Methodist Hospital was both a source of stability and an agent of change for the South Philadelphia community. Gone were the Hospital’s oldest buildings, and with them, the elegant and elaborate architecture. In their place rose sleek, modern facilities, equipped to handle the latest technology and equipment. The current Medical Office Building was erected and construction was completed on the emergency, outpatient, X-ray and pharmacy departments. With the baby boom still in full swing, the Hospital was busier than ever. 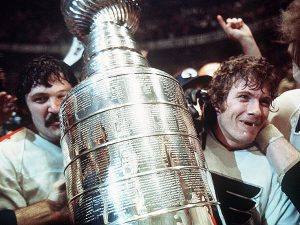 1974, Bobby Clarke and Bernie Parent hold the Stanley Cup in the Spectrum

Dr. Peter Herbut, who served as Chairman of Pathology at both Jefferson and Methodist, was named President of Jefferson in 1965. During that year, Methodist Hospital participated in a citywide program to immunize citizens against polio, tetanus and whooping cough, and the Medicare and Medicaid programs went into effect. Frank Rizzo was elected mayor of Philadelphia in 1972, and Methodist Hospital had front row seats for the Broad Street celebrations when the Philadelphia Flyers, know as the “Broad Street Bullies,” won the Stanley Cup in 1974 and again in 1975. 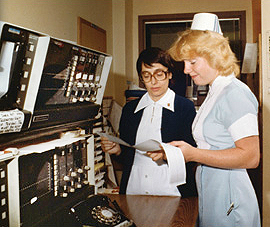 As Methodist celebrated a century of service, the Hospital had grown into a multi-unit complex and had evolved into a dynamic force in the neighborhood. The School of Nursing graduated its first male students in 1979, breaking the gender barrier in a female dominated profession. The 1980s saw major construction and renovations that included a new surgical suite, ICU, and expanded emergency department. Diagnostic imaging services were significantly advanced, bringing in the new technologies of CT and MRI. Our Healthmark occupational medicine program was established. In 1988, the relationship with Thomas Jefferson University Hospital was further strengthened through a preferred affiliation agreement. 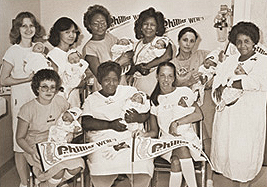 During this era, women entered the workforce in record numbers, going into jobs and schools that had been the domain of men. The Phillies won the World Series in 1980, vaccines for Hepatitis A and B were discovered, the CDC introduced the term “AIDS”, and the nicotine in cigarettes was deemed addictive. IBM introduced the first PC in 1981 and by 1992 people were “surfing the internet”. 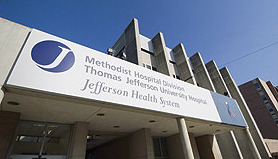 1996, A division of Thomas Jefferson University

As the Hospital began its second century, planning for the future became a challenge. Spiraling malpractice insurance rates and changes in reimbursement diminished Hospital resources. The 9/11 terrorist attack on the World Trade Center forever changed the U.S. and the world. 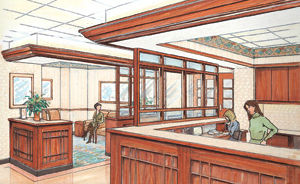 There was an expanded focus on community outreach to a neighborhood increasingly more diverse. In 1996, Methodist Hospital became a division of Thomas Jefferson University Hospital. The community’s needs were growing and the Hospital became more creative in how it delivered services. The closing of the Family Birth Center in 2002 was heartbreaking, but necessary. The Rothman Shoulder and Elbow Center was established. The Women’s Diagnostic Center opened under the medical leadership of Dr. Lillian Stern. Both units continue to be regarded as “Centers of Excellence”. 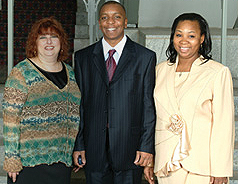 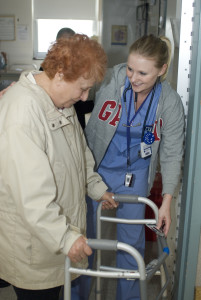 It is through the Foundation that Methodist Hospital can continue to reach the community it was established to serve.

The future of the Foundation is critical to the future of our neighborhood. We embrace our partnership with, and salute the dedicated men and women of the Hospital who everyday join with us to ensure the day is just a little brighter for ever person we encounter.  Methodist Hospital colleagues believe that every person who enters the doors of the Hospital are our neighbors, no matter if they come from the corner of 9th and Shunk or the four corners of the world.

If you are interested in partnering with us on projects that can have a positive impact on the lives of others, please contact Diane Pirollo, Foundation executive director at 215.952.9006 or email.