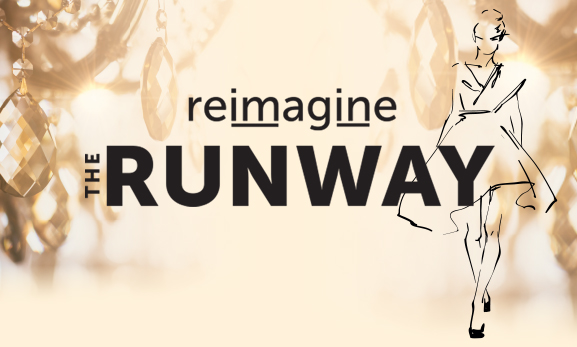 Proceeds support the purchase of early mobility equipment
for patients in the Medical Intensive Care Unit at
Methodist Hospital. 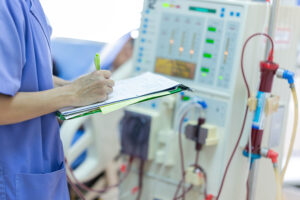 Patients admitted to the Intensive Care Unit are at risk for neuromuscular weakness, often severe, for numerous reasons. The underlying disease process, being bedridden and inactive, inflammation, electrolyte abnormalities, and medication side effects can lead to changes in the nerves and/or muscles, resulting in a diminution of strength and functioning that may last for months, even years. Until recently, it was thought that prolonged inactivity, often with heavy sedation in patients who receive mechanical ventilation, was necessary to safety administer the advanced therapies required to increase the change of survival. In the past, the focus on rehabilitation of survivors of critical illness began after they had left the ICU and often continued after hospital discharge at inpatient rehabilitation facilities. New studies demonstrate that the severity of impairment can be diminished by increasing mobility of the patient while still in the ICU. Jefferson Methodist Hospital has initiated a multidisciplinary program to minimize sedation and increase patient engagement in exercise while still in the Critical Care Unit, even while still on a mechanical ventilator. Initiating such a program early in the patient’s ICU stay can nearly double the change of decreased time on the ventilator, less delirium, and increased probability the patient will be discharged to the home rather than a rehabilitation facility or nursing home. 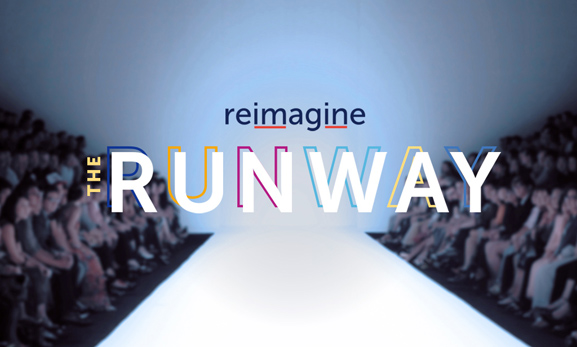 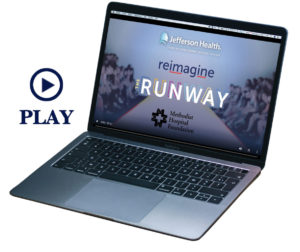 Proceeds benefit the Men’s Health Program in
South Philadelphia, designed to provide men with a
comprehensive and preventive approach to healthcare. 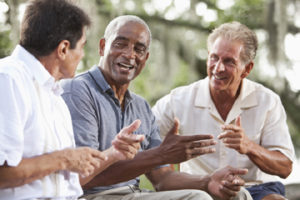 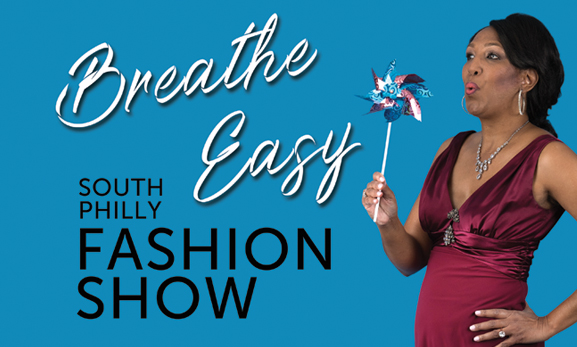 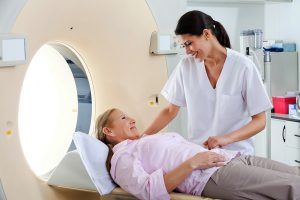 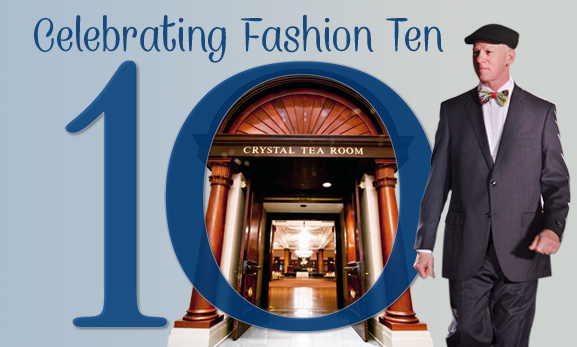 James E. Robinson is the recipient of the Dr. Scott Stewart Founder’s Award, which is named after our Hospital founder and given to recognize a person of outstanding character and exemplary commitment to Methodist Hospital and the community.

Jim holds two key roles in the Methodist Hospital family: He is Senior Vice President/Chief Administrative Officer of Methodist Hospital-Jefferson Health and President of the Methodist Hospital Foundation — he also serves on the board of the Police Athletic League and the Children’s Scholarship Fund Philadelphia and is a member of the St. Thomas Aquinas School Advisory Board. He holds a bachelor’s degree in psychology and an MBA in health care administration from La Salle University. 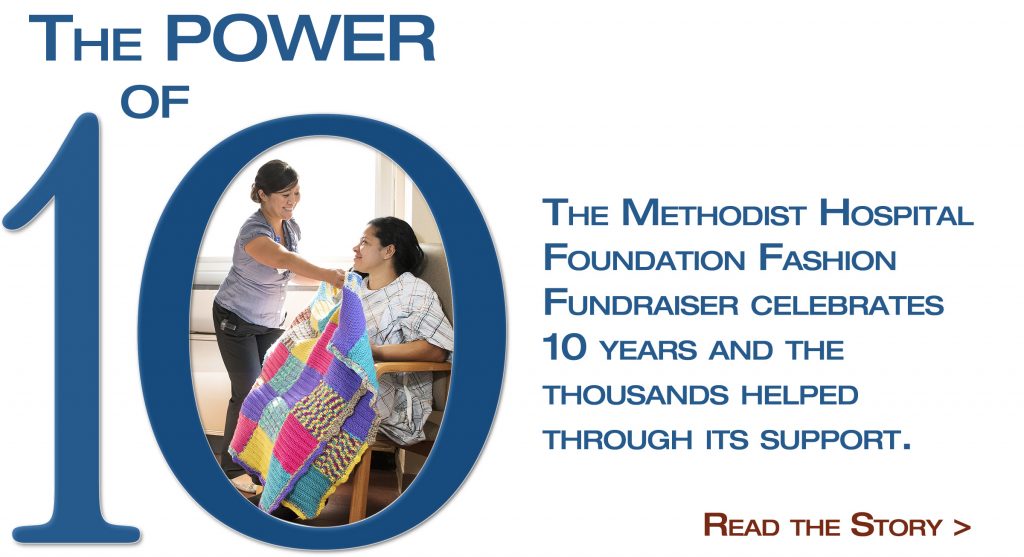 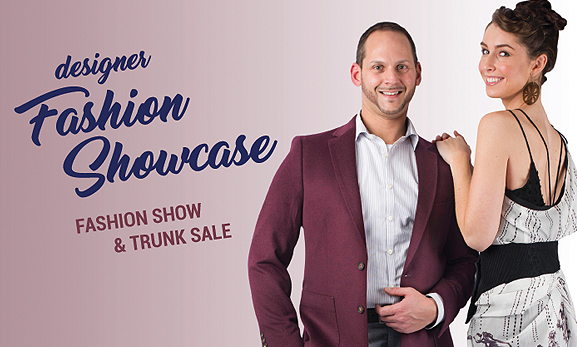 Supporting: Jefferson Advanced Spine Center
Methodist Hospital has your back

Methodist always “sees” the whole patient when it comes to care and healing. With the newly opened Jefferson Advanced Spine Center, patients are receiving state-of-the-art, laser-focused care for spinal conditions and a tailored patient experience at a Center of Excellence that is reaching those in need locally and regionally. Your support will ensure its success. 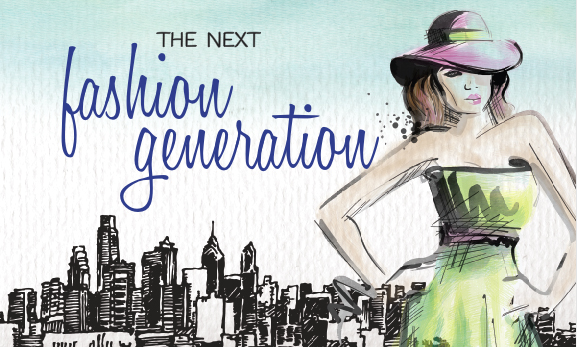 The Next Fashion Generation
Fashion Show from Today’s Young Designers

Being discharged from the hospital can be just as stressful as being admitted.  The gap between hospital care and home recovery is where the greatest risk lies for at-risk patients. During the month after discharge, a paramedic pays ongoing visits to the patient to help with their transition home. Paramedics connect in real time to case workers or doctors so they can assess or stop a situation before it escalates. 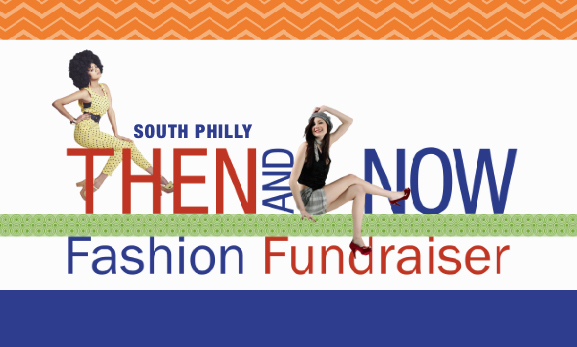 Dr. Salvo is the recipient of the Dr. Scott Stewart Founder’s Award, which is named after our Hospital founder and given to recognize a person of outstanding character and exemplary commitment to Methodist Hospital and the community.

When he heard he was receiving the Founder’s Award, Dr. Salvo said it was a “shocker.” It was no surprise to the Methodist Hospital family, which had selected him to be chairman of the Department of Orthopedic Surgery in 1993 and then vice chairman in the Jefferson system. It was no surprise to his patients or to the more than 150 residents who have rotated through Methodist since 1994, when he started the orthopedic surgery training program. Mentoring residents has always been one of his favorite activities.

Supporting: Acute Care for the Elderly (ACE) Unit
On the road to recovery 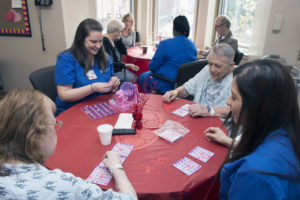 Bingo in the ACE day room

The Fashion Fundraiser provided funding for tablets and smartphones that ACE will use for virtual consultations with families about follow-up care. Because ACE encourages patients to socialize and move, the Fundraiser also supported art and gardening programs. 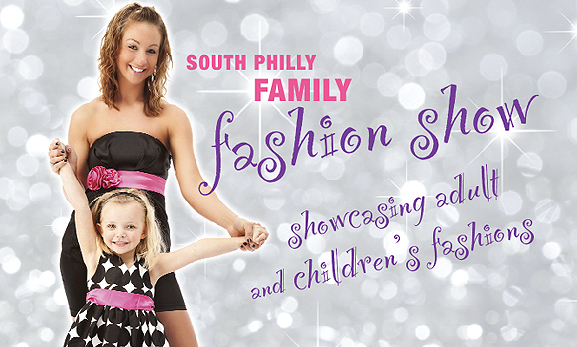 It is hard to pick the primary reason Janice Bellace has such affection for Methodist Hospital. It could be that she grew up in South Philadelphia, in Methodist’s shadow. Or that it was where her mother volunteered, and where Ms. Bellace chose to donate in her mother’s memory. Or it could be her decades as a member of the Board of Trustees for Methodist Hospital, its Foundation and Thomas Jefferson University Hospital.

Ms. Bellace is equally dedicated to her work at the University of Pennsylvania where she is the Samuel A. Blank Professor of Legal Studies and Business Ethics and Professor of Management at the Wharton School, but she always finds time for Methodist Hospital and its Foundation and what she sees as the lasting legacy that is being created. 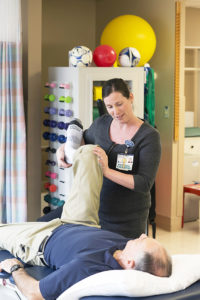 The pediatric to geriatric set have come through Outpatient Rehabilitation Therapy’s doors, some with new injuries and others dealing with the onset of disorders. The goal always is to get patients back to a comfortable level of independence and a strong quality of life. Now, Jefferson’s Methodist therapy team, known for providing the best one-on-one care, will be doing it with the most advanced equipment, in a brand new, easily accessible space for the community they love. 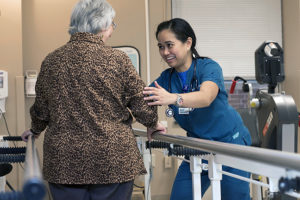 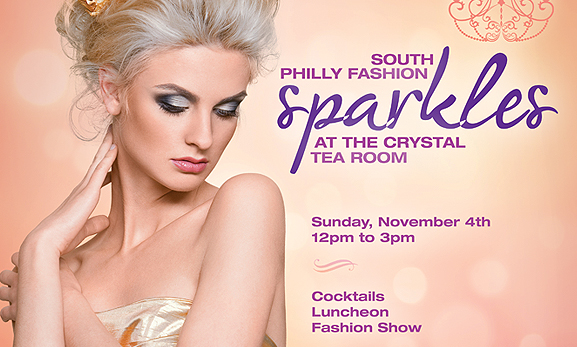 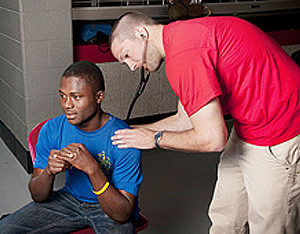 Getting a physical to play school sports in Pennsylvania isn’t a choice, it’s a requirement, whether the future alma mater is South Philadelphia, Ss. Neumann-Goretti, Preparatory Charter or Bok Technical high schools. The very least Dr. Jerry Steingard, the family physician namesake of Steingard & Testa Medical Association at 415 Bainbridge St., felt he could do for the kids was to make the testing free and as far-reaching as possible.

Moved by the on-court death of college basketball star Hank Gathers in 1990 and inspired by a similar program run by his doctor brother, Paul, in Phoenix, Ariz., Dr. Steingard, Founder of the Athlete Health Organization (AHO), has seen AHO flourish over the last decade from screenings kids in a school gym to a population health organization that provides comprehensive physicals and education. 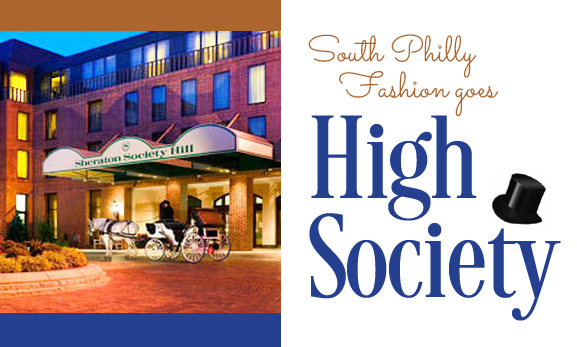 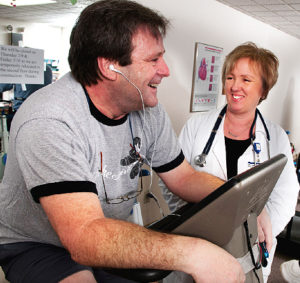 The Outpatient Cardiac Rehabilitation program at Methodist Hospital has been critical to long-term wellness. The program is bursting at the seams with patients learning proper nutrition, smoking cessation techniques, better stress management and individualized exercise routines.

The Outpatient Cardiac Rehabilitation program is the only monitored cardiovascular wellness program of its kind in the Philadelphia region. “This program extends the care provided by a patient’s primary team by encouraging adherence to their recommendations for lifestyle changes and medications,” the program’s Medical Director David M. Shipon, MD, FACC, said. Dr. Shipon is a practicing non-invasive cardiologist who specializes in the prevention of heart disease. 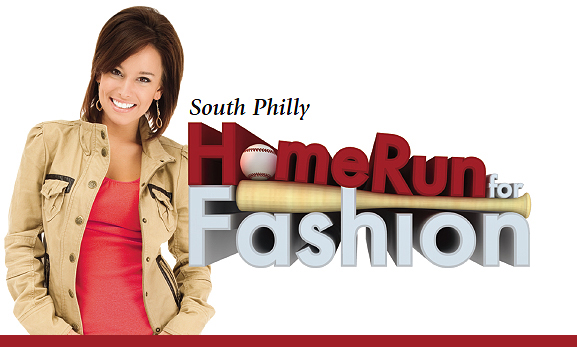 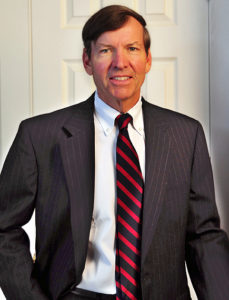 Continuing his family’s legacy of service from as far back as 1930, when his grandfather served on the board and became vice-president of Methodist, Mr. Deming has enjoyed having the opportunity to watch the hospital grow into the renowned medical facility it is today. He is especially proud of the relationships that have been forged between the board of the hospital and its doctors and staff.

For cancer patients, receiving infusions is just one of the myriad treatments that can be stressful- physically and emotionally. With this in mind, Methodist’s new Infusion Center was designed to make each patient’s experience as stress-free, relaxing, and comfortable as possible. Details such as coordinated color schemes and hardwood floors for pleasant aesthetics, reclining chairs and televisions for patient comfort, and individual computers in each suite for staff to easily and more efficiently manage patient history, all make this new facility a truly patient-centered environment. 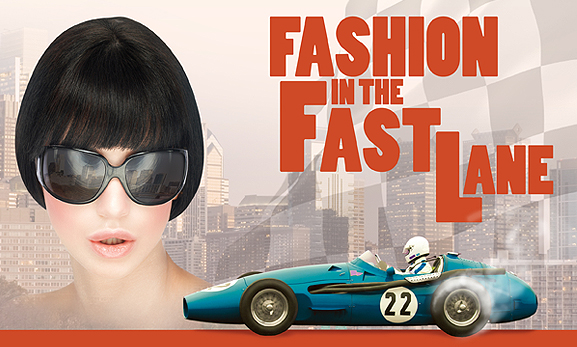 Fashion in the Fast Lane 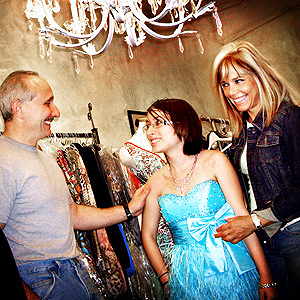 Jim Rogan, with store owner Bianca Simone, right, with daughter Jessica who walked as a model in the fashion show

A Packer Park native who lost her battle with cancer was honored with a scholarship funded by the Methodist Hospital Foundation fundraiser.

Anne Rogan worked at Methodist Hospital for more than two decades. She started out in her 20s as a secretary, but in her late 30s, was diagnosed with breast cancer. The news didn’t stop the Packer Park native from pursuing a degree in nursing — something she had always wanted to do, husband of 23 years Jim Rogan, of Deptford, N.J., said.

While at a loss of words when it comes to describing his late wife who died last year, he said she definitely was determined. “She worked full time, she went through chemo, went to school and came home and took care of us, which was pretty amazing,” Rogan said of the family — which includes daughters Nicole and Jessica.

“She balanced quite a few things. You couldn’t imagine. And guess what? She wouldn’t complain. It’s sounds crazy, but she wouldn’t complain,” he added. At Methodist, her dedication to others will serve as an inspiration through the Anne C. Rogan RN Memorial Nursing Scholarship for students pursuing a degree in nursing that are academically qualified, in financial need and are caring and compassionate — “the qualities that Anne possessed,” Diane Pirollo, Foundation executive director, said.

“She was an exemplary, compassionate person who was universally loved by everyone,” Pirollo said of the 2007 Employee of the Year. Her husband was informed of the scholarship named in his wife’s honor in July. “She would have loved that,” he said. Added daughter Jessica, “I think it’s really nice because we can help support my mom and the scholarship that’s named after her and help others who want to become nurses.” 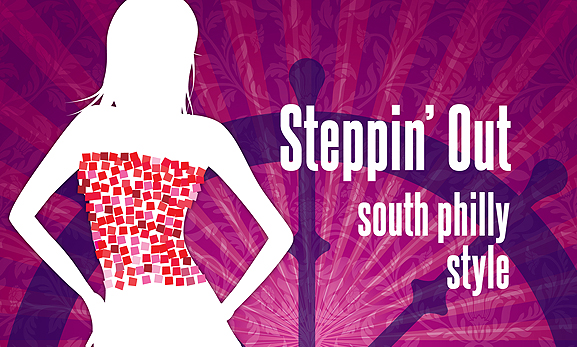 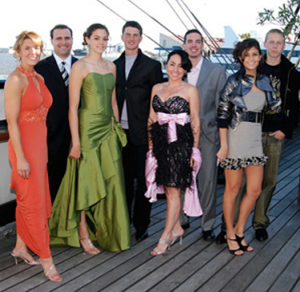 A sell-out crowd of more than 250 people packed the beautiful tall ship MOSHULU on Penn’s Landing for fashion, cocktails and lunch in support of the Methodist Hospital Foundation.

“This is really a South Philly event for the Foundation,” Diane Pirollo, foundation executive director, said. “We’re using the shops and stores on Passyunk Avenue for all the fashions.”

The four female and four male models also have local ties—four are students at Neumann-Goretti High School, 10th and Moore streets, while four are employees of Methodist Hospital.

“I am definitely not a model by trade,” Michelle Eisenhower, M.D., associate chief medical officer for the Methodist campus of Jefferson Hospital and one of the show’s models, said. “I’m probably a lot more comfortable with my stethoscope than I am on the runway, but we’re all having a great time, and it’s a very worthwhile cause.”

Nine stores on the avenue outfitted the models: Aci Nae, Bianca Simone, Gigolo’s, Show Barrel, A Man’s Image, Pasquale Scioli, MIA Philadelphia, Harriet’s Innterwear and Frankie’s on the Avenue. Hair was done by Headhunters. “We thought it was a really good event to do—it’s for a good cause,” Janae Didonato, co-owner of Aci Nae at 1928 E. Passyunk Ave., said.  “It puts the spotlight on East Passyunk Avenue. I think a lot of people in South Philly have a lot of style.”

The groundwork of the runway show began coming together in the summer, fashion coordinator Lauren Raske said. Each attendee was greeted with a mimosa at the event’s noon start. Over four hours, a luncheon and socializing was capped by a 45-minute fashion show. Pirollo was optimistic about the exposure for all involved.

“We wanted to keep it local in the community,” Pirollo said of the fundraiser.